A public appearance and publisher disaster...

This segment is all about the trauma of my first 'coming out' as an author at my local sci-fi/fantasy con. And the Warder's Djinn was the stresser.

In the weeks before the event, I begged the EIC to have the book ready and released by the convention. It had been sitting in files for months, and each time I inquired about it, I was told that someone else was holding the books back.
When the week of the convention dawned, I was panicked. There was no sign of my title and I was freaking out. I had volunteered to do panels at my convention on writing, and with only one lost little book behind me, I wasn't really as impressive as the guest that was accompanying me. When you have a bestselling author next to you at a panel, you want to appear competent, but my hopes were slowly being flushed down the toilet.
Frantic emails were sent and assurances were given that the book would be up. (I later found out that the CEO had posted it to the website while the EIC had forgotten all about it for the ninth time.)
I did my panel on Sex in Fantasy, held my head high, and returned home after the convention to find that the publishing house I worked for had cracked in two over the same weekend I had just spent introducing myself to the world as Viola Grace.
Many stories were handed around, and I asked a few of the 'reliable sources' what had happened. Unfortunately for them, they changed their record of events between the first week and the fourth. This is why I keep all business related emails. People embellish, embroider and get creative.
Stick to the truth and you don't have to worry.
A strange thing happened in the chaos of that fallout. I panicked and asked to pull the books I had in the hopper, and the CEO called me for the first time. She asked me for time, gave me publishing dates, and everything I had was edited as soon as an editor could be arranged.
Sick to my stomach, I wrote a series based on a character I called Nakedella. It was a fun flighty romp, and since I was unaware of dealings behind the scenes, I offered the book to the ex-EIC and she accepted it for her new company.
My publisher's CEO worked through the amazing backlog that she had been unaware of. She started over and I was surprised to find that my books were selling.
It took nerves of steel that I didn't know I had to let the books come into the light, slowly but surely. They did, and I found out something that I had known all along. Sci-Fi erotica sells.
Posted by Viola Grace at 13:53 No comments: Links to this post

Email ThisBlogThis!Share to TwitterShare to FacebookShare to Pinterest
Labels: Nakedella, The Champions of Terra, The Warder's Djinn, Viola Grace

My first Book and what the heck is going on...

Wardstone was out, the third party seller known as Ebookad was selling it and I was excited.

Something strange started happening to the Ebookad website. It was there one day, gone the next and back again. Finally, 6 weeks after my book release, Ebookad was gone. No one had an idea of what was going on.

It turns out that this third party seller had not paid their bills. Their website was 'unplugged' by their server, and now all of the publishers were stuck without having been paid.

Now, most folks are unaware that if our publisher's don't get paid, we don't get paid. It is in our contracts. And so with this disaster, not only did my first sales go up in smoke, but I had no idea when or if my next book would come out.

Not an auspicious start to a new writing career.

My publisher took out a personal loan and paid out all of the ebookad sales that she could find. This gave me payment for the first 14 books I ever sold. Despite the roiling nausea that was filling me at this point, I was encouraged. People were willing to read my work and I had 11 books in the hopper by now at my publisher. This might work out after all.
Now, I just needed another book to be released...
Posted by Viola Grace at 11:12 1 comment: Links to this post

A Game of Patience

Well, with six books seething in the hopper, I kept writing. No release dates came my way and when I queried about it, I was told there were problems with the new site, that the CEO was holding things back (found later to be untrue. CEO was shocked when she saw the size of the backlog.), and that sci-fi didn't sell.
During NanoWriMo, I created the Warders. The Warder's Djinn, the Warder's Dragon and the Warder's Wolf.

Still nothing was on the horizon for a release, and when a new author who had taken a space in the 'Sins and Virtues' collection had a nervous breakdown, I stepped in and took Anger.

This book was GUARANTEED to come out on Feb 14th with the rest of the books in the series so I wrote up a storm and almost went nuts in the process. My heroine did the same, so we were crazy together.

My release date finally arrived and I was giddy with excitement. Due to a problem with setting up a new website, the publisher's site was down and the books were listed at a well trusted third party seller...

Two weeks from the first release of my first book...Things went sideways.
Posted by Viola Grace at 21:38 No comments: Links to this post

With the 100 looming and my desperation to avoid writing, I have decided to tell a story.

Dragonlord appeared chapter by chapter and with the feedback provided by the readers I was able to tailor my work to what they seemed to want.  I wrote it to a happily for now, and then had to start on a few other stories.
The Champions of Terra started to take shape, I took the criticism over 3 years, learned from it, and kept going with each 1.5-3k installment. I felt confident in my writing and I worked those stories into submission length novellas...now...where should I send them?
I attend a few sci-fi/fantasy cons and I ran into an author who had a certain sparkle in her eyes. I spoke to her after the panel and she mentioned that she would have liked to have been able to talk about her other area of expertise, and I knew in that instant that she wrote erotica. I asked her about where she was published and she gave me the website. Imagine my delight when I saw they were based in Canada!
I sent in my first submission and held my breath. Arena Station was out in the world and someone was assessing it. When the okay came through and my first book was accepted I ran around the sound making a high pitched teakettle noise. I had no idea then that it would be 18 months before my book saw daylight, that the EIC thought 'sci-fi doesn't sell'. I was wallowing in happiness and soon submitted The Wench and the Giant, Deal with a Dhemon, Avari Nyx, and of course, my favourite to this day, Haldis Imperium.
These books sat and waited...and waited...and waited...and I just kept writing.

In the next installment, I will tell you what happened next on my road to my first published ebook.

Posted by Viola Grace at 10:09 No comments: Links to this post

Email ThisBlogThis!Share to TwitterShare to FacebookShare to Pinterest
Labels: Arena Station, Avari Nyx, Deal with a Dhemon, Dragonlord, Haldis Imperium, Marks of Admar, The Champions of Terra, The Wench and the Giant, Viola Grace

With one hundred solo ebooks right around the corner, I decided to begin a blog about what goes through my head as I work on these books. Some may be interested, some may not, but here it is for anyone to see. 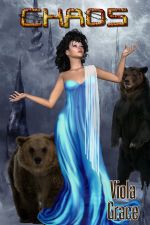 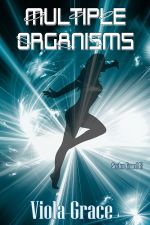 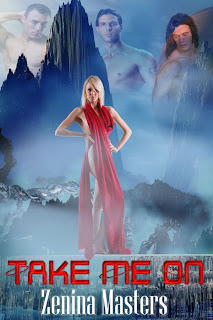 These are the first three books that will take up the bulk of the next few weeks of discussion. Take Me On is fighting me all the way. Getting three men in bed with one woman is trickier than it appears.
Posted by Viola Grace at 21:45 No comments: Links to this post