The Short and the Short of it...

Hello, now as most reading this know, I write short stories almost exclusively.
This has caused me some problems with reviewers and readers in the past, but though I have issued three full novels, it doesn't seem to help the matter.

My name is Viola Grace and I write short stories.

To find out why, you have to go back to my roots. WAYYYYY back... When I was a kid, books were my refuge. I could dive in and be in another world.
When we moved from a rural area to the city of Winnipeg, the school I attended had a library...a library... I was in heaven.
At seven, I was a slightly more advanced reader than my peers and dove into the Andrew Lang fairy books. Red, green, crimson, olive...all the books with stories that wrapped you in another world and let you go when everything was sorted.
After fairy tales, it was greek myths, and after mythology, the natural progression in my teens...was comic books.
I had a job at 13. I had to buy my own clothing with that job, but the rest was mine to spend...I picked comic books.
The endless serial of stories that continued again the next month set the pattern for the way my brain thought of stories.
There were books, I loved all the soft sci-fi i could get my hands on...but Comics were my passion. The first thing in my life that was mine alone.

Some of the comics I collected were, Amethyst (my only DC comic), New Mutants, X-Men, X-Factor, X-men Classic, Wolverine, West Coast Avengers, and of course, the Canadian super team of Alpha Flight.

A reviewer once referred to my books as morality tales and with the history of my evolution in reading now shown to you, the good must struggle a little, the evil must be punished and good has to win the day.

The full length novels I wrote were cute and fun, but oddly, my audience enjoys them but they don't draw new readers.
Financially, they tanked.
As much as I love my Nexus books, when they come out it is for fans because they are just not viable as a series.

That said, I had a book I was writing for submission to an editor, but I have decided to write it and give it to Extasy books. Look for Confining Fire in September 2012. The first of 3. one every 6-12 months.

Oh yeah, did I mention? Writing a novel takes me 6 times longer than the equivalent word count of short stories. I can write over a dozen short stories in the time it takes to craft one novel.

Is it about the money? Yup. This is my day job.
It might make me sound mercenary, but everyone likes to get paid for a full day's work. Authors are no different.

There. I have spilled my early tales and my motivations...I hope this answered questions that folks haven't asked because it wasn't polite.

Next post, I will discuss why some authors use pseudonyms and why it seemed like a good idea at the time. (not me, Viola Grace is on my driver's license)
Posted by Viola Grace at 10:03 No comments: Links to this post

Once upon a time, seven years ago...I received confirmation that my book had been accepted by Extasy Books. Preparing for my grand debut, I started to design my own website.

I determined that I could not have a website up until I had a book to advertise, so my plotting and scheming and the backgrounds my brother made in DAZ studio waited. And waited. and in 2006 my website was born. It has been made and maintained by me for the last five years and I am done with it.

I never contemplated having over a hundred books, let alone making my living from my writing. It was a vague dream that I had never let firm up into reality.

Fast forward to today. A month ago I realized that I need a new website. I have outgrown my old site. My reliable, cartoonish site.

Asking for recommendations I contacted a web developer...paid the bill...and by the new year I should have an organized, professional site up and running.  **crossing my fingers**

My site will remain bright, no grim blacks and nastiness, but everything else is up in the air. Crossing my fingers and back to my writing...

Preparing for the holidays...author style

I have fought to complete my full-length novel all summer and I only have one conclusion...I was destined for short stories.

While I can write a full novel, I get bored with the project and lose my focus. I still want to complete Confining Fire, but instead of seeking mainstream publication, I may simply hand it over to my current publisher.

Extasy books has always done a good job with my work, in editing and in cover design (yes, the poser covers are my idea. i like knowing that the story you are about to read does not have any ties to reality)

So, with 1/3 of my novel in place, I have decided to let it sleep and I will concentrate on the stuff that I really enjoy. The short stories that frustrate reviewers and kindle readers alike.

It has been peculiar that folks object to the idea of short stories, but from this moment on, they can stuff it. I am a short story writer and that is where I will pitch my tent.

Posted by Viola Grace at 14:31 4 comments: Links to this post

As some of you may know, and others may not care but here it is anyhoo... I am bi-polar. This means that I am either up and chipper or mopey and grim. Both show up in my books.
It is under control and I live a fairly normal life, but the ups and downs still happen.
When I am in a down cycle, I read to snap me out of  it. The problem in this is that I was recently reading an erotic series and now I have to write a mainstream book.
So, here I am...working on a Sector Guard book and I am having to censor the hell out of the characters to keep them from jumping each other on the page.  It is a bizarre conundrum and one I have rarely faced before. How to make inherently sexy characters keep to business is my fight and you can let me how I did when Seal the Deal comes out.

Posted by Viola Grace at 13:29 2 comments: Links to this post 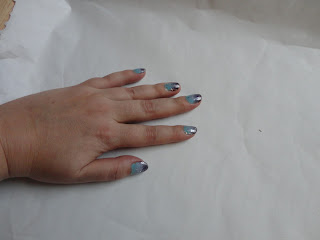 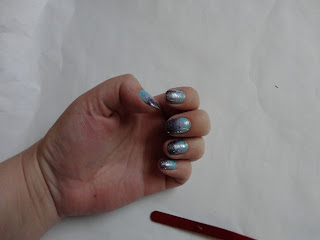 There. better photos of my nails. I should really stop doing midnight manicures. Sigh...Sadly, I feel that penguin nails will be my 'thing' during the holidays.
Or...falling stars and nebulas.

Youtube.com is a dangerous thing.

Now...on to writing. Seal the Deal has taken a weird turn. My friends Dave and Gale had their beloved Samoyd Niki pass on to the great bunny chase in the sky. As such, my solo heroine is joining the Sector Guard with the first pet ever. Maxi will join Counsel as they travel with Contract to assignments.
I look forward to the problems of a large fluffy venomous pet in the confined area of a shuttle.

Oh, and on a Zenina Masters note. The Four Ever More series will resume in December.
There. i am finally using my blog for good and not evil. Well, the nails are a little evil. :)


Posted by Viola Grace at 22:37 No comments: Links to this post

Sigh...okay. I don't really hate YouTube, but it really gives me far too many ideas.
tonight, because i needed something blue on my fingertips for a new book, I painted my nails in a graduated blue-purple pattern with sparkles.
I should have been writing. Sigh...
At this point I am simply thanking my stars that I don't have the nail stamps yet. Those will be here in a month. 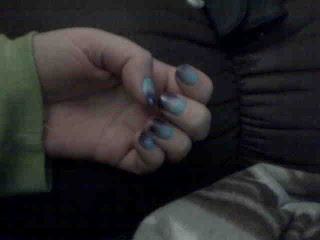 The nails are powder blue with a medium blue to dark purple going across them like oncoming twilight. Just the perfect thing to keep the character's skin tone in mind during Seal the Deal.

Posted by Viola Grace at 20:44 2 comments: Links to this post