Okay, so its holiday time.
I wanted something more festive than 5 colours of blue creeping up my nails. So, I turned my fingernails into wee little penguins. 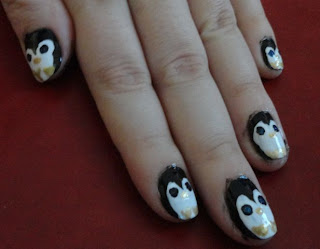 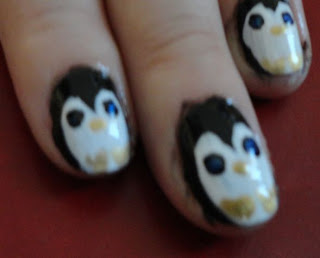 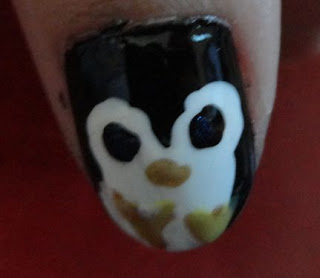 Posted by Viola Grace at 13:05 No comments: Links to this post

¾ cup margarine
1 cup packed brown sugar
½ cup white sugar
2 eggs
1 teaspoon baking soda
1 teaspoon vanilla
1 teaspoon salt
2 cups flour
1-2 cups mini chocolate chips
Cream the sugars and the margarine together until smooth.  Beat in eggs. Add Vanilla.  Sift the flour together with the salt and baking soda.  Add slowly to the sugar and egg mix.  When all of the flour is incorporated add the chocolate chips.  Chill for 1 hour.
Heat the oven to 375 degrees F.
Drop the batter onto ungreased cookie sheets using teaspoons (or use an ice-cream scoop for really big cookies).
Leave room for expansion.  If the cookies look a little tall, squash them down with wet fingers.
Bake them for 10-12 minutes.
Let cool slightly, remove from pan and cool on a rack.
**add 1/2 cup chopped nuts for variety**
Posted by Viola Grace at 17:27 1 comment: Links to this post

A sneak Peek at Pilot in Command

Dec 15th...the final sector guard book takes us to the beginning when Pilot meets Commander and is sent out on a mass recruitment while the Alliance council tries to shut down the project before it starts.
Helen has enjoyed her tenure as an Alliance pilot, but working with unpredictable crews is wearing on her nerves. When an incident of defense of the innocent via mutiny ends her career, controlling warships is over. Joining the Sector Guard felt right, but if she had known what was ahead of her, she may have held back when the handsome Azon doctor offered her a job.
Hyder has always known the matches that he sees are the perfect mate for the person he is speaking to. He may not know a name, or a location, but he knows what everyone’s perfect match looks like. Seeing himself as the Terran’s perfect match is a surprise, but when he looks her over, he is sure he is up to the challenge. He just has to put Pilot in command.
Excerpt:
Helen Taline swung her ship around so that the gunners had full access to the raider ships. They fired back and she felt every impact on her hull like a mild burn.
“Pilot! What the hell are you doing?” The com screamed in her mind, a sound run through the wires that led to her implants.
“I am flying the ship, Captain. Nice of you to ask.” She winced as another strike hit her broadside.
“I told you to clear the area!”
“There are civilians in the area. We are buying them time, Captain.” Her voice was a mock-up of her physical voice translated from electrical impulses into a speaker.
Captain Westerhale was a coward. She had filed numerous complaints against him, but it was a pilot versus the captain. It was not as if she could physically witness anything from inside her tank.
With a quick flick of her mind, she disconnected all manual controls. The crew was in her body, they were going to have to play by her rules.
Her gunners were devastating the raiders and they fell back, but it wasn’t good enough. Keeping the bulk of the Burnt Star between the raiders and their initial targets, she pursued them until an array of ships was lying in her wake.
The captain was screaming into her sensors and she released the control back to the control-room staffers who were trying to cut her override.
She would face disciplinary action for the hijacking of her own ship and she was ready for it. Those family transports had nowhere to hide and for a moment, she had been the only thing between them and disaster. She would do it again.
Posted by Viola Grace at 19:17 2 comments: Links to this post